Nevada Barr used to live in my hometown and I would see her out and about running errands.  I always felt tongue tied when I saw her —a real author!  But, I got a chance to meet her at a book signing and she was very nice but I was still tongue tied!!

Track of the Cat
Nevada Barr 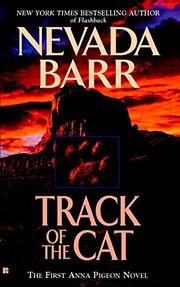 Anna Pigeon left New York City following the accidental death of her husband in search of change in her life.  That change led her to the Guadalupe Mountains National Park in west Texas where she serves as a law enforcement ranger with the National Park Service.
“Every spring and fall rangers in the Guadalupe Mountains followed paths through the high country chosen by wildlife biologists.  These transects–carefully selected trails cutting across the park’s wilderness–were searched for mountain lion sign.”

Anna has been out searching but instead of a lion she stumbles upon a Park ranger that has been killed of an apparent mountain lion attack but something looks suspicious.

“Anna listed the absurdities. “When is a Lion not a Lion?” she said aloud, putting her confusion into riddle formula.  When it’s dead, she thought, and that’s what this lion –or some lion–will be if the hunt’s not stopped.  Again she looked at the slides.  She was not mistaken.
Proof… Proof there was something fishy about the Drury Lion Kill.”

Anna sets out to determine who did it and why.

Track of the Cat  won the Agatha and the Anthony awards in 1993 for a first time mystery.  The popularity of this mystery and the very capable Anna Pigeon has led to many other novels set in America’s National Parks.
Happy Reading!
Mimi
“You shall not murder.”
Exodus 20:13  NIV Bible
Over 1200 bloggers joined the 31 Day Challenge, check them out here!